On Friday, September 1st, the Lucas Film merchandising machine went full bore with Force Friday II. It’s the Black Friday of Star Wars stuff. Books, clothing, school supplies, and of course TOYS are all released. Last year, the premiere of Force Friday was to push the toys associated with Rogue One. This year, we were inundated with teases of the upcoming The Last Jedi.

**BE WARNED: This post MAY contain some spoilery stuff from the Star Wars Universe. If you havent’ seen them all (what’s wrong with you), or if you really want to know NOTHING about The Last Jedi (even who’s in it) then turn back now. Go read my article about when you’re told everything is “fine”. I liked that one.

Some fans decided they didn’t want to venture out to the stores in fear that some toys may give away spoilers. I don’t blame them.

I remember buying the soundtrack to The Phantom Menace a few weeks before the movie was released. You have to be safe with a CD right? It’s just the thematic music of the genius John Williams. Yeah, until you look at the track listings and see one is called Qui Gon’s Funeral. Ooff. Spoiler Alert!

The year The Force Awakens premiered, Duracell ran a commercial with a little girl dressed as Rey. We knew nothing about Rey. But this little girl not only used a lightsaber, but pushed Stormtroopers using the Force. Did a Christmas commercial just ruin the big Jedi reveal about Rey!?!

All that being said, it turns out I didn’t have a choice. A co-worker needed some heavy products from Target and I went along to lend some muscle. Just so happens, it was Force Friday II.

The minute you walk in the door, it’s there. Rey is staring you in the face.

Just inside the door is a new looking Stormtrooper, Phasma and another NEW character alongside them. Looks like these are the new guards of the mysterious Snoke.

Turns out that if you download an app via Star Wars and scan these displays you get all kinds of virtual images on the app. I didn’t try it. Did anyone?

I decided the real reason for the Target trip could wait – off to the toy section I went. I was met with Rey, staring at me again – a huge display.

The front part is reminiscent of the rocks that Rey makes float in the new trailer for The Last Jedi. (You’re welcome for including that right here….)

If you put your hand over the rocks, Rey’s lightsaber will ignite with that beautiful glowing blue and the sound fills the store. Yeah, I did it like 5 times.

The shelves were still pretty packed at 1:00pm.

The store opened at midnight for the really big fans. I have to tell you – in the 90s, I was that fan. My roommate, at the time, and I would chart the new Star Wars collectibles and buy them by the trunk full – was ridiculous what we spent and the time we focused on this. Entire paychecks in the hands of Toys R Us. Now in my 40s with family and responsibilities, the paycheck was safe.

I didn’t see anything all that so interesting that my wallet pop out of my pocket. So, I turned around and headed back for the original work-related mission. Then I saw it. More of those giant cardboard cutouts.

There was another whole section of Force Friday II by the soon-to-be-filled Halloween section. 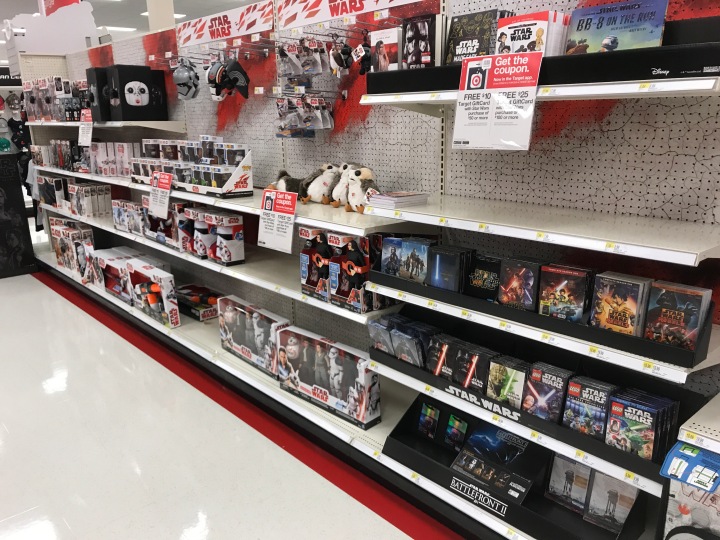 They had a whole wall of T-Shirts, bed sheets, towels and yes – FULL SIZED CHEWBACCA PAJAMAS!

Then I saw the display of Funko Pop! figures. I’ve seen these on social media, in passing at stores, but I’ve always just skimmed on by…. until I saw the Star Wars attraction. 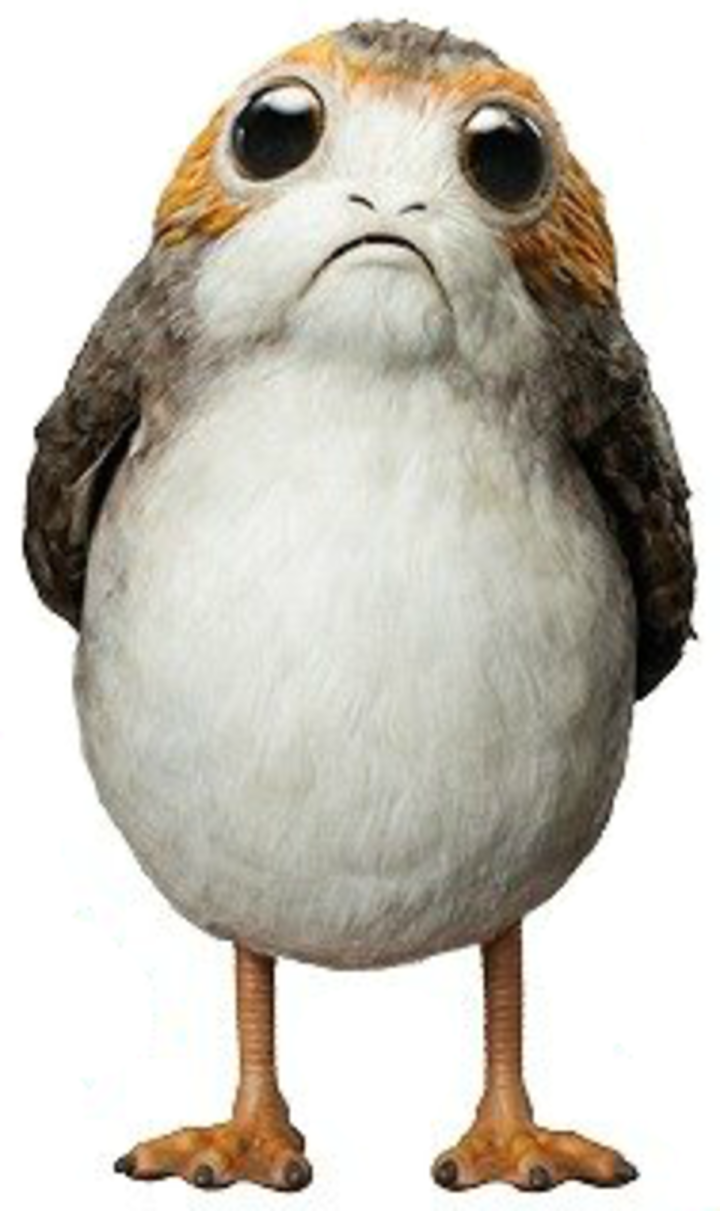 Uh oh. My wallet is shaking….

But then I remembered! I have an old Visa gift card with like $17 on it left over from my 40th birthday. I decided to treat myself to one of these Pop! figures for my desk at work. But which one? Oh man. This is tough.

No joke, I picked up a different one every 30 seconds and changed my mind over and over again. I’ll get R2. He’s my favorite. Wait, this Vader is very cool. Chewy with the Porg is pretty cute. But, this is Force Friday… I should get one from the new movie – no? I’m not sold on Snoke yet, so maybe Rey? I wish there was a Luke. When I was in 8th grade I got to meet Mark Hamill. He shook my hand and told me that “The Force is strong with you”… but that’s a different story. Mark Hamill is the man and I’d be honored to have him standing on my desk. But, alas, the guys at midnight bought out all the Lukes, apparently.

Then I saw it. What was this little guy? It’s a black colored (almost Vader like coloring) BB unit, with a flatter head. It’s like the R4-D5 to R2-D2. This guy, named BB-9E, is coming with me.

When I get back to my desk I place him there with an R2 tin can already standing guard. 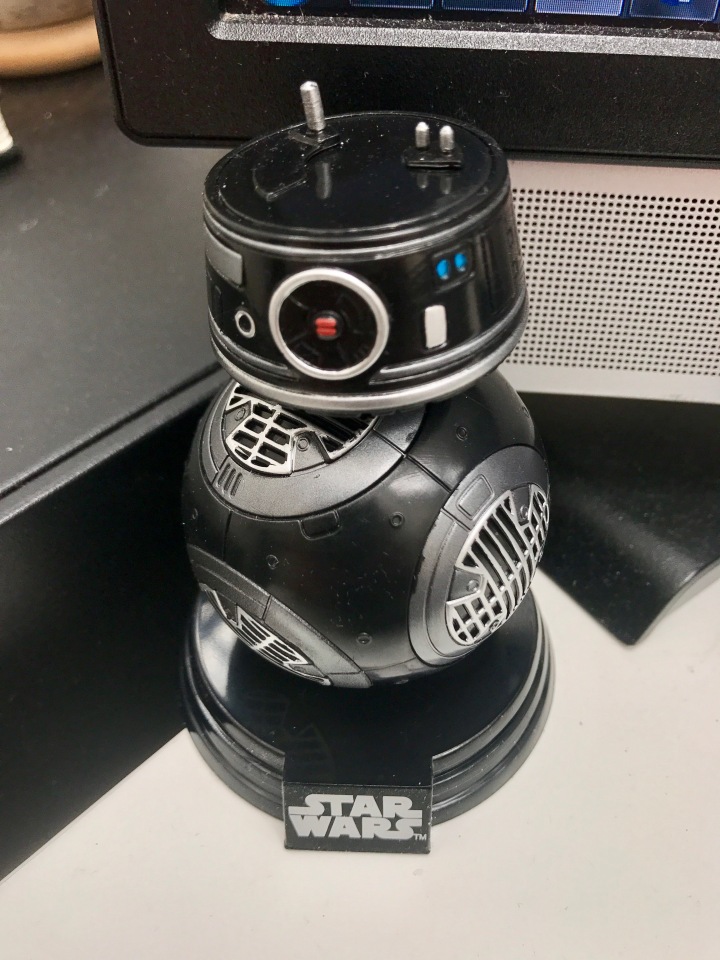 I noticed that Lego and Star Wars on YouTube were pushing BB-9E. He’s apparently a First Order BB unit and follows along with Kylo Ren. Ok, this is cool.

I wish I could have gotten Luke. Of course, that would have led to me needing to get Rey too, cause she’s just plain awesome.

Force Friday II was a lot of fun to check out. I’m happy with my one little purchase and happy to have been a part of the ‘frenzy’. My old roommate currently lives in Texas and he and I were texting back and forth. His stores were pretty empty compared to my Target. Poor dude.

Not we just have to wait for December to see this thing!

Still there? Ok. Me too. Check it out. I went to WalMart this weekend, one week removed from Force Friday II. No cool Rey display like Target had, but check out this vehicle hanging from the ceiling!

They didn’t have very much stuff left from Force Friday II. A lot of General Hux figures (no one wants this one at either store, apparently). Cool ceiling display though. Looks like a cool ship flyin…

There goes the rest of my Visa Gift Card. But now I’m happy to have Mini Hamill sitting on my desk.