One of my absolute favorite bits of baseball ephemera on YouTube is from a 1980 game between the Baltimore Orioles and the Detroit Tigers in Baltimore. I cannot at all do it justice in my description of it.

It’s got some four letter words, so don’t play it loud at work.

We pick up the action in the top of the first inning with Haller yelling that pitcher Mike Flanagan was behind the pitching rubber, and thus had committed a balk. Eddie Murray, the Orioles great first baseman, wasn’t having it. Murray alleges that Haller had been gamed by the Tigers first base coach, something Haller denied.

It is at this precise point that the true greatness of this video reveals itself. Earl Weaver, the crusty, cantankerous Orioles manager, rushes into the frame. Haller and Weaver have had their run-ins before. The tone of the discussion is set by the very first words Weaver utters: “You’re here, and this crew is here, just to **** us!”

Haller winds up, a grand gesture, a running point. “Boom,” he cries, thus expelling Weaver from the game. Boom. My heart leaps with joy.

Now Weaver can do whatever he likes, according to the unwritten rules of baseball. He’s got to “get his money’s worth.” 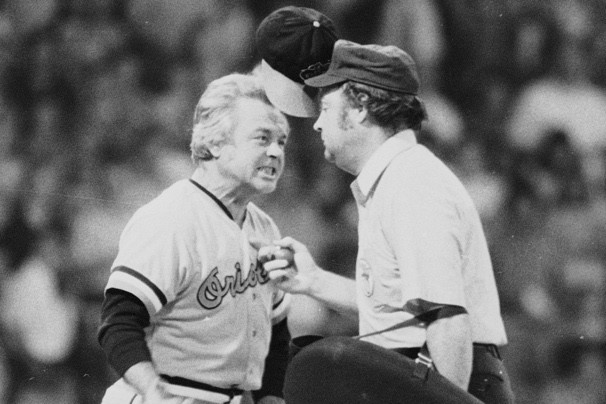 The two men start bawling at each other in these grand gravelly voices. Haller points at Weaver. “You run yourself Earl, you run yourself,” he shouts. “Get your finger off me,” Weaver yells and swats at Haller’s hand (keep in mind at no point did Haller touch him at all – these are just Weaver’s antics.) Haller, a tall lanky guy starts walking around in circles in the infield. Weaver, a pesky gnat of a guy, buzzes around him. They then start screaming at each other that the other is a liar.

These are grown men.

They then trade another round of observations. “You ain’t no good,” they say. Weaver makes a move to leave, but Haller’s last remark has clearly gotten under his skin. “You wait for five, ten f***ing years, who’s in the Hall of Fame?” Haller replied, “Who’s going to be in the Hall of Fame?” “You know it!,” Weaver non sequiters. “Why? For f***ing up World Series?” Haller wins this one.

It goes from there. Everything about this video is great.

I would like to contrast it with what currently passes for confrontational excitement in MLB.

Brewers’ Scooter Gennett steals second. Cardinal Yadier Molina’s throw appears to get him, but the ump signals safe. The second baseman Kolten Wong protest briefly, while Molina, like a tattletale, is looking for towards the dugout for help. Mike Matheny, the Cardinals manager, calms walks out to have a cup of tea with the umpire. Then they put on headsets and make “the right call.” I bore myself typing it.

There is nothing about what happened in that game that would get a fan excited, or that would say anything about the personalities of the participants involved, or could be used in a future game to gain a little leverage over an ump. It takes the human struggling of sports and makes it something for an auditor. Have to make sure the record is right.

Instant replay is a huge instance where baseball forgets that it is an entertainment, and that it is not curing cancer. Give me three minutes of Earl Weaver and Bill Haller going nuts over an MLB board meeting any day of the week.